Whether you’re tackling a timeslip or time-travel novel, a book within a book, a dual storyline, or simply a series of flashbacks, the technical challenges of interweaving two sets of main characters, two plots, and two story arcs stay the same: how do you switch back and forth without losing the readers’ interest, or being confusing, or losing the right sense of pacing; and how do you bind both the stories together to strengthen your themes? We’ll take a look at different ways to make this work, by dodging the possible pitfalls and making full use of the range of rewards that this much bigger canvas can offer a story.

New York Times and Globe & Mail bestselling author Susanna Kearsley is a former museum curator who brings her own passion for research and travel to her novels, weaving modern-day romantic suspense with historical adventure and intrigue. Her books, which have been translated and published in over twenty countries, have finalled for the UK’s Romantic Novel of the Year Award, won two RT Reviewers’ Choice Awards, two National Reader’s Choice Awards and a RITA. Her 13th book, Belllewether, comes out in April. 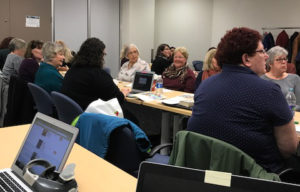 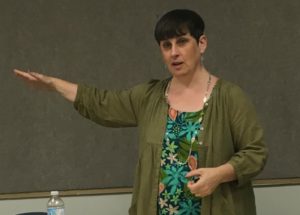 When Susanna Kearsley came to talk to the Ottawa Romance Writers’ Association about how to weave multiple story lines together, she launched right into the good stuff.  Using a twin-stranded story approach allows an author to skip over the boring parts, provide exposition in an interesting way, and build tension within a story.  The challenges are that having multiple stories and multiple sets of characters can confuse readers and create a larger book.  Also, sometimes readers will prefer one strand over another and vocally let the author know.

Twin storylines work best when the stories mirror each other.  Both sets of characters can be facing similar choices, such as trusting love after a failed relationship.  If there is a historical gap between the characters, the character in the past’s decision can influence the decision of the character in the present.  Kearsley divides her plots into the River and the Boat.  One storyline is the river, moving independently of the other and able to work on its own without the other thread.  The other storyline is the boat, which depends on the river storyline.  To keep things balanced, Kearsley makes sure the boat storyline has plenty of character interest and development to offset the higher drama of the river storyline.

There are six common types of twin-stranded stories:

The key to making a twin-stranded story work is to have clear transitions between the different stories, either by scene or chapter breaks, differences in narration, or using in-text cues such as dates or names.

However, she didn’t just have useful information on craft techniques.  She shared about how, despite her phenomenal success, she still has a hard time in the middle of every book.  She’ll doubt herself, her instincts, and her career.  She’ll have to fight an impulse to go chase new and shiny story ideas.  There were a lot of heads nodding as she talked about how insidious the temptation can be to avoid trying to avoid potential failure.

She also talked passionately about the romance genre and how proud she is to be part of it.  Every story can end happily if the author picks the right ending point.  It surprises her how a book about something horrible and rare can be praised as wonderfully realistic but stories about people meeting and falling in love aren’t, despite happening every day in real life.  She believes that there is a far greater number of wonderful people in the world than destructive ones, but that we don’t hear about them because the wonderful actions aren’t tabloid-worthy.

Her last words of advice were for new authors to slow down and not be pressured into breakneck publishing paces.  The important thing is for an author to understand the business of writing and publishing and then find a method that works for him or her.  Keeping oneself in the reader’s awareness doesn’t require a book to be published every 90 days, there are plenty of other techniques to build reader connections.

Next month, ORWA will be presenting a workshop on writing realistic danger with an explosives specialist.  Join us at 101 Centrepointe Drive on Sunday, December 3rd from 2:30 to 4:30.